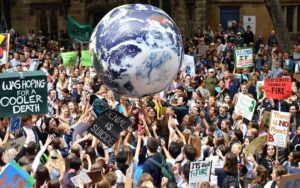 We, anarchist communists know that capitalism is a socio-economic system over- producing products for a minority who can afford them to buy and consume. Capitalism is breeding a destructful -primarily at the expence of the environment- competition between bigger or smaller private owners of productive means the goods of whom are made by exploited and/or over exploited wage slaves and then exchanged through a market for profit and perpetual growth.

The driving force of capitalism is directed towards making the biggest profit possible and therefore it is not employ efficient, sustainable productive practices. Because of its very nature, capitalism is producing things based on exploitation and always for sale, it is under-producing for the needs of the people generating constant crises.

So, how we, anarchist communists can link environmental awareness to working class movement and poor people’s affairs and demands making them relevant to the majority of the society we live in? How we can achieve this task as ecological protection must be linked to the general fight for social, political and economic freedom, as ecological destruction has a decisive and immediate impact on all our lives and especially those of the working poor people? And, of course, having in mind that is only a working class-led social revolution against social and economic domination that can ultimately guarantee and develop a world that not only meets all our needs and desires, but a world in which sustainable co-existence with nature is fostered and secured.

Because we, anarchist communists seek to fight against all forms of hierarchy and social domination, class is not only defined in terms of whether or not you own the means of production, but also whether or not you control the means of social administration and coercion. And we know well, that the ruling class is made up of the huge and fat capitalists and the wealthy and healthy managers of the State – in the government, military, state-owned enterprises (parastatals), police and the judiciary, and the working class is that which does not own nor control – it produces wealth for the benefit of rulers and owners. But the working class includes also the unemployed, home-based workers (women especially), migrant workers etc., who with the peasantry, who are exploited by landlords, banks and the –again– the State, form the popular classes. We, as anarchist communists believe that it is in these popular classes as such where we can see a revolutionary potential to reorganise society.

This is why we must employ and put forward:

– A revolution in trade, by putting an end to globalisation

– A revolution in the modes of consumption

– A revolution in the modes of production

As Melbourne Anarchist Communist Group (MACG puts it in a Statement of Shared Positions (in http://melbacg.wordpress.com/2013/11/12/200/ ): “A commitment to ecological sustainability does not mean enforced poverty in living standards and even less so does it require a return to a hunter-gatherer society. We therefore reject Malthusians of all varieties and especially in their primitivist manifestation. Production of a wide variety of goods and services needs to be increased, not decreased, in order to abolish poverty and want from the face of the Earth. We hold that it is capitalism, not human nature, that is responsible for the wanton environmental destruction which has occurred in the last two centuries and is threatening the very liveability of the planet which we inhabit”.

Libertarian communism must reach a point of balance between the capacities to produce, the needs of populations, and the limits of the biosphere. And beyond rational management of natural resources, the environmental question must lead us to fundamentally reconsider humanity’s place on the planet. This is because we cannot build our future against that of the rest of life. Here, too, the ideology of domination must be broken, so that humanity can find a future.

*In this article extracts from position papers and/or arguments of Alternative Libertaire, Zabalaza Anarchist Communist Front and Melbourne Anarchist Communist Group (MACG) have been used. Dimitri Troaditis is a member of MACG and Anarkismo.net and A-Infos editorial collectives.